They are recognized as one of the most efficient fastening systems available. They incorporate a solid post formed in the center of the recess during the heading process. This unique feature renders the tamper resistant 6 lobe Pin TX screw tamper proof, reducing the risk of vandals or intruders tampering with or undoing the screws. Due to the security drive design of the vandal resistant tamper 6 lobe Pin TX security screw it is suitable for higher torque applications and is a 2 way reusable fixing. Also known as Star Pin Drive, Tamper Torx®, Torx® Pin, Resistorx® and 6 Lobe Pin.
They  have been used extensively to prevent unauthorized removal in correctional institutions, hospitals, elementary and secondary schools, colleges, universities, public places and retail stores. 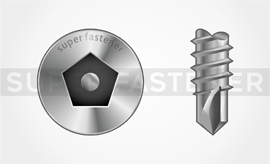